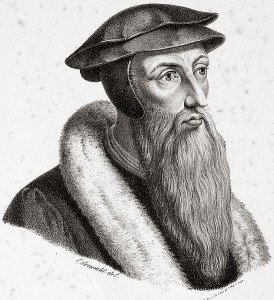 Herbert Douglass, in the book Fork in the Road has written a helpful summary of why Calvinism and Adventism cannot be unified on the idea of what the Gospel means. You may not know it, but Calvinists are the “big wigs” in the evangelical world. From popular scholars like R. C. Sproul to pastors like D. James Kennedy and John McAurthur. Certainly there are some who do not agree with all of the positions of the Calvinistic cause, but many of the popular authors and preachers in the Evangelical world are Calvinists.

By Calvinists, I mean those who hold to the five points of Calvinism, or at least most of the points. This is often referred to as TULIP, In short these are:

Where the System Begins

They begin their system with the idea of God’s sovereignty. God is ultimately in charge and can do anything God wants to do. No one else has freedom. God alone has freedom. Due to total depravity, we cannot chose anything but sin. Thus God must choose those who will be saved and thereby will be choosing those who will be lost. Humanity can not judge God, the saved should be happy that they are among the ones that God has chosen to save.

Adventism begins with the concept of God giving humanity Freedom. We say that God has given the gift of freedom to all of humanity. We get to choose whether we will follow Satan or God’s government. This gift of freedom has been given to the entire universe of beings, according to this idea.

Interestingly God uses this world to demonstrate where Satan’s principles will lead. Thus God chooses to demonstrate the rightness of God’s cause in this system.

Finally, God has chosen all of us in his son to eternal life, and those who do not reject God’s rule of love will be saved at last.

In the end, we have one scheme beginning with God’s sovereignty that makes human freedom impossible. On the other end we have humanities freedom as being something given to humanity by a sovereign God. God wants us to choose the righteous government. But the Calvanistic system makes such a choice impossible unless the one has already been predestined to salvation.

Finally, in the Adventist system, God allows Satan’s choice to play out before the entire universe. Freedom of choice is an important component of Adventism while it is impossible under Calvinism.

While there are certain similarities between the two groups, and both can recognize that one can be saved while agreeing with the other position. But like my Calvinist friend told me after a long conversation, “You may be saved…but you are wrong on this issue.” So we see that we can’t synthesize the two views. And why would we want to? Either the Calvinist view is right, or the Adventism view is right, or perhaps logically another option is correct, but all of them are not right. Because of this, it is time for Adventists to stop getting our “understanding of the love of God” from folks who do not accept at all the freedom of humanity which is at the foundation of the Great Controversy that we preach. It is time to decide if we are Adventists or not. If not, then Calvinism might be an acceptable alternative, go ahead and look into it, but if you are going to be Adventist, then it is time to stop running behind the evangelical teachers who have different presuppositions than we have. If we are going to be Adventists, be Adventists.

No Adventism and Calvinism don’t mix. It is time to stop acting as if it does. It is time to stop acting like the contradictions that we are currently spouting are actually “paradoxes.” It is time to stop telling our people that our evangelical friends have Jesus and we have the law, so go to them to get Jesus and come to us to get the law! No! If we ain’t preaching Jesus, then we need to start preaching him in the context of the message that God has given to us. Be not deceived our Calvinist brothers and sisters do have a place for the law, and it is an important place, but it is just not the same place we have for the law and for Jesus in our understanding.

So what is the answer? Maybe it is time to start reading Steps to Christ again instead of Experiencing God. What’s the answer? Using The Great Controversy Theme as a hermeneutical key to interpret everything. Otherwise we will continue to drift wondering why we even exist as a people.