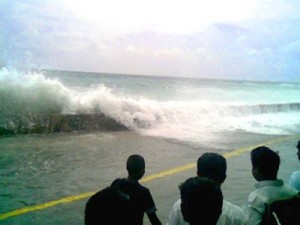 A few Adventist websites are addressing the “prophetic significance” of the earthquake in Japan. On AToday, Ervin Taylor makes a startling prediction

In the spirit of traditional Adventism, I would like to prophesize. I predict that, over a period of six months, the Adventist Review and Adventist World will publish, on at least four occasions, in some form either by itself or in connection with other “signs,” statements to the effect that the recent major devastating earthquake in Japan is another sign that the “End is Near.”

Well, maybe it is not so startling…Probably before he could hit the publish key Shawn Boonstra, formerly of It Is Written, already was ready to fulfill Taylor’s prediction by saying:

Without the Bible’s prophetic road map, large-scale disasters become nothing more than unfortunate random events. And from the perspective of tragic ignorance, the signals of Jesus’ rapid approach shake us up, but fail to make a lasting difference. People are shaken, but not stirred.

An article that Alexander Carpenter over at the Spectrum website took great exception.

OK, lets be honest, you gotta admit that it is really quite easy to say this is a “fulfillment of prophecy” even if you don’t ultimately buy it. I mean Jesus himself said there would be “earthquakes in diverse places.” Mark 13:8. I would bet that you will find many more Christians of many denominational groups making assuming that there is prophetic significance for this event. I mean really Taylor’s prediction is like predicting that the sun will set tomorrow…

A church built on apocalyptic eschatology will have a tendency to see significance in every event that comes. You may not like it, but you certainly can’t be surprised by it.

Pastoral Sensitivity and The Preacher’s Language

Now there is a question of pastoral sensitivity that we must ask however. OK, you might argue that Evang. Boonstra and the Adventist Review shouldn’t have used the verbiage “shaken not stirred” to apply that ongoing terrible tragedy. Maybe so. however, I read it as a preacher turning a popular saying into a homiletic device. I agree that it was not the most sensitive thing to do. I would also agree that despite my best attempts, from time to time my sermons include sayings and verbiage that I probably should have said better.

It is true that Adventist eschatology points Adventists to see prophetic significance in every terrible event. But to be honest, anyone who reads those apocalyptic texts in the Bible could come to the same conclusion (and many do).

Is God Trying To Tell Us Something

Now there is the whole “God is trying to tell God’s true church something” bit. Ok it is possible to read this as “God killing of thousands of innocent lives just to tell the church something.” I don’t know, but I don’t think that is Boonstra’s interpretation. I would guess that Boonstra would mean that “God is withdrawing God’s hand of protection and thus the evil one is allowed to do more and more of these things. Thus it is a signal to us that the end is near.” Certainly folks may disagree with that due to having a different theology, but is it really an insidious attack on God’s goodness.

To conclude, I think that Boonstra is simply giving a traditionalist Adventist explanation of what we can learn from terrible events that happen in general and specifically the earthquake in Japan. Does this mean that the end is right now? No, some would argue that , but I doubt Boonstra would. But certainly you can’t be surprised. I mean the church often measures how close we are to the end by disastrous events. So certainly it will see disastrous events as meaning we are closer to the end.