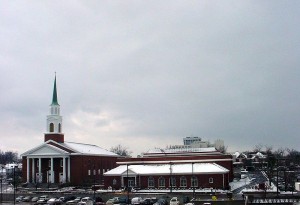 There is a new word that has begun to arise amongst us.Â  It is the word “unchurched.”Â  The word is meant to imply that we should stop trying to preach to the “churched” who presumably already have God, and spend all of our efforts (or at least most of them) on the “unchurched.” Â  It sounds all right on the surface, but is it really our calling?

First of all, the word “churched” is not a Biblical word.Â  We have all heard the preachers tell us that just because you are a member of a church does not mean that you are converted.Â  But then some of these same people will change gears when talking about evangelism and speak about addressing the unchurched.Â  Simply put, we are told to preach to the world.Â  Whether Baptist, Methodist, Pentecostal, and yes even Adventist, we cannot assume that someone is in a saved relationship with God simply becuase they are “churched.”Â  We cannot assume that we have no message to take to someone simply becuase they are “churched.”

But more than that, we Adventists have taking our self identity from the Revelation 14 which we have thought was a message of warning to the entire world.Â  We are telling everyone to not get caught up with Revelation thirteen’s Sea Beast system.Â  (Revelation 14:6-12).Â Â  We are to warn the entire world which presumably includes “chruched” and “unchurched” of the great deception that will be put on humanity.Â  If that is our identity, to only look at a segment of the world is to betray our mission.

I have not done a scientific study of many of these mega churches, but from my interaction with members, I find that many of the members have simply moved from other churches in town.Â  They do reach some “unchurched” members, but they also reach a whole lot of “churched” members.Â  So in a practical sense, why is it that they grow on the basis of transfers and then want to tell you to only address “unchurched” and some want to even follow the idea.

So in a real sense, the whole idea of “unchurched” is against our mission.Â  On top of it all, who really follows that idea and refuses to engage in what they call “sheep stealing?”Â  No one, well maybe those few who have bought into the idea…